The Roentgen Medal
THE OBJECT OF DESIRE.

Every year a different one. Yet always someone who deserves it.

The turmoil of war prevented some major celebrations – neither Roentgen’s 100th birthday on March 27, 1945, nor the 50th anniversary of the discovery of X-rays on November 8, 1945, could be celebrated in a dignified manner. However, the Roentgen Medal has been in existence since 1951. It was created to honor the 50th anniversary of rewarding Wilhelm Conrad Roentgen with the first Nobel Price.

The Röntgen medal is awarded by the Mayor of the City of Remscheid. Recipients are personalities who made a special contribution to the progress and the promotion of Roentgen’s discoveries in the broadest sense. It has become a highly respected and desired award in scientific communities.

The Society of Friends and Benefactors of the German Roentgen Museum Remscheid-Lennep e.V. selects suitable scientists from all over the world and proposes them to the Mayor. In our photo gallery we collected some impressions from the past years. 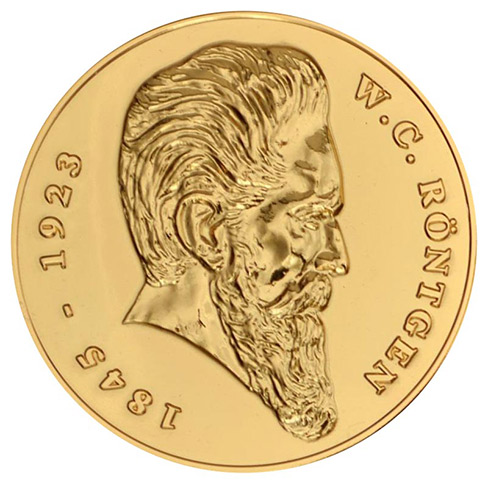 Professor Beatriz Roldán Cuenya (born 1976 in Oviedo Spain) is a physicist at the Fritz Haber Institute in Berlin.
She receives the Röntgen Plaque in recognition of her pioneering work in understanding catalysis, especially electrocatalysis, and the associated possibilities for the use of new sustainable energy sources of the future.